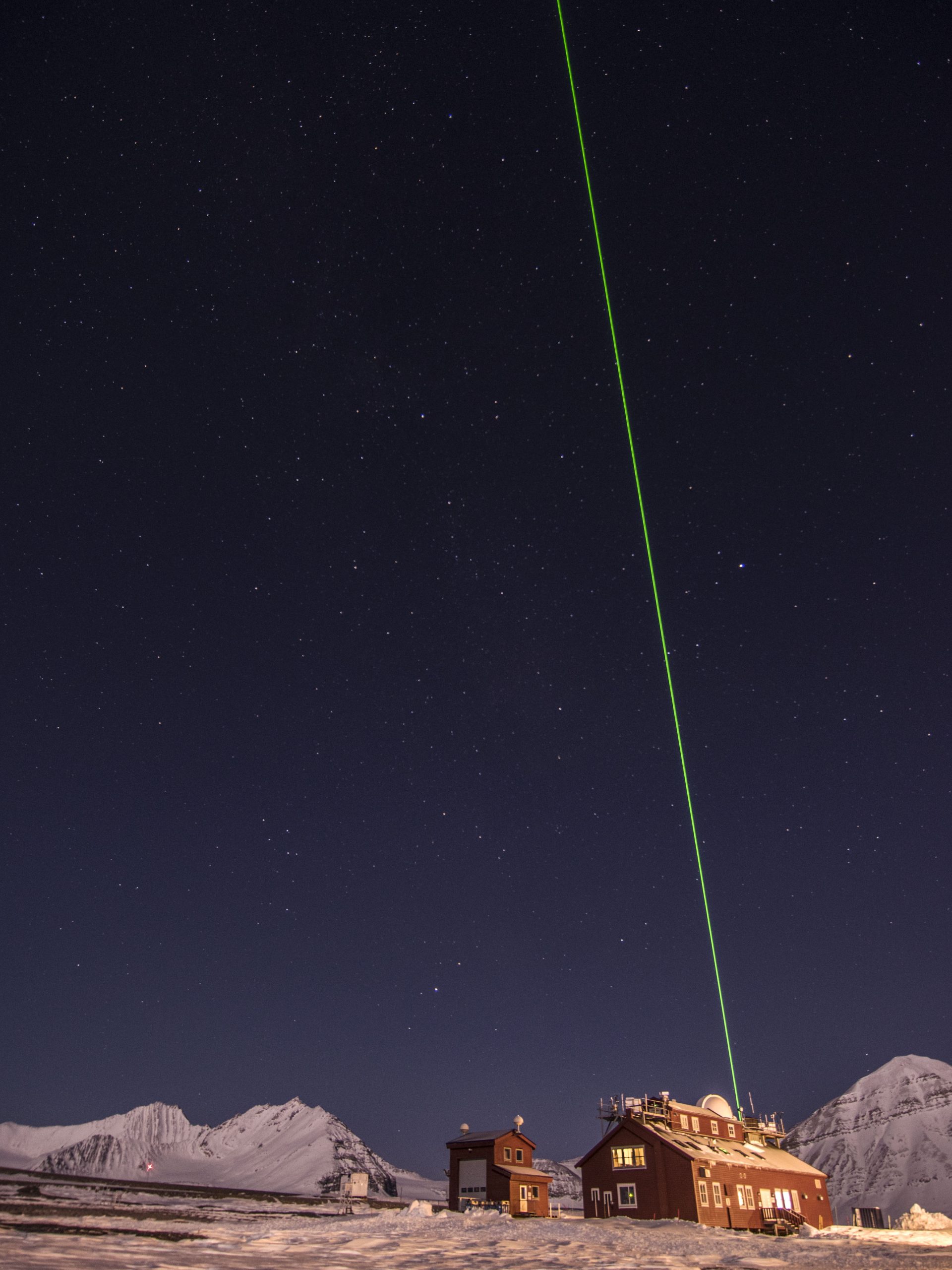 The green laser coming out of the AWIPEV observatory is literally one of the highlights of town in the polar night during clear sky. But we are not just shooting it in space for fun. Inside the observatory, there is a telescope that catches the laser light that is being reflected back on particles in the air. Depending on the amount of light that is reflected back and the time it takes to be reflected back, one can say something about the amount of particles in the air and in which height they are.

With our eyes, we can only see the green laser light (which has a wavelenght of 532 nm), but two other invisible wavelengths are hidden in the beam too (355 nm and 1064 nm). This allows to differentiate roughly between different sizes of aerosols (due to differences in reflection behaviour of different wavelenghts). Additionally, the light that is emitted is polarized. When polarized light hits on a spherical particle, the light will stay polarized. However, when it hits a very “not-spherical” particle, the light will become depolarized. We can measure this too and therefore know something about the shape of the particle. So all in all, with the Lidar we can say something about the amount, the height, the size and the shape of the particles in the air.

So why this important? Well, particles in the air play a role in the formation of clouds. You might know a video like this:

Without aerosols in the air, a lot of water needs to be in the air in order to create clouds. In this video, the air is apparently very very clean, which is why you don’t see steam coming from the tea: There are simply no particles on which water droplets can bind. As soon as they put cigarette smoke close by, vapor clouds are forming. The particles in the smoke act as cloud forming particles.

This is a very visual example that shows how important particles are for cloud formation. However, what effect clouds exactly have in the climate, is not so obvious. Roughly said, clouds can have a warming effect because they capture the heat that is emitted from the Earth’s surface. They can be cooling on the other hand because they block sunlight. Which factor dominates depends on the type of cloud and how reflective it is. And this is again depending on the type/size/amount of aerosol. In the Arctic, one additionally has to take into account that there is often snow and ice (causing a lot of sunlight to be reflected from the surface) and that the solar elevation is low. This again has different warming and cooling effects.

The warming or cooling effect of aerosols and clouds are one of the biggest insecurities in climate models and especially in polar regions, this is poorly understood. Understanding there presence, interaction and the effect they have on the climate better, would make climate models more accurate and would help to make better predictions. So far the relevance of this damn cool laser.

One thought on “Arctic Science: Lidar and aerosol science”